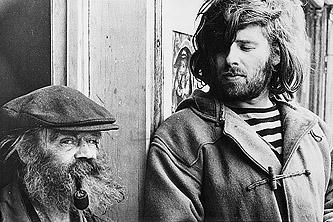 Edwin McKenzie, of no fixed abode, was painted many times by the artist Robert Lenkiewicz, between the late sixties and early eighties. Because he lived as a vagrant in a circular container overlooking a rubbish tip in Plymouth Lenkiewicz renamed him Diogenes, after the Greek philosopher who lived in a barrel. Diogenes’s philosophy was “live while you can and live in clover, when you’m dead, you’m dead all over”. He was born in 1912 and claimed that he had smoked a pipe since he was twelve, was a former lightweight boxer, designed and built the Plymouth Civic Centre, had won the Derby twice and the Grand National once, had played for Arsenal, and built the Tamar Bridge. Diogenes stood sentinel at a desk at the door to the artist’s studio demanding 10p for entry claiming the title ‘secretary’. When Diogenes died in a Plymouth hospital in 1984 Lenkiewicz and several of his children surreptitiously gained entry to the hospital morgue, wrapped the corpse in a winding sheet and stole it away. He was embalmed the next day, encased in transparent resin and remained under the bed of Lenkiewicz’s son for some weeks while he was revising for his A’ levels at an adjacent desk.

When the matter came to the attention of the health inspectorate at the City Council Robert Lenkiewicz was required to produce the body. A lorry containing the coffin was driven through the freezing lanes of Devon pursued by a convoy of City Council officials, police, journalists, photographers and other interested parties and regulators. The coffin was solemnly removed from the lorry, positioned in the centre of the artist’s studio, crowbarred open by the Inspector, whereupon Lenkiewicz leapt out crying ‘Habeus corpus’. The actual corpse could still not be located. The authorities demanded that the body be either buried or cremated. Lenkiewicz argued that there was no need, and insisted that he wanted to use Diogenes as a giant paperweight. He pointed out that the City Museum itself had two Egyptian mummies and a Palaeolithic man. An inspector told him ‘it may happen in Mexico or Sicily, but it is not going to happen in Plymouth’. After the publicity several people wrote to Lenkiewicz asking if they could be similarly embalmed and join Diogenes on display. Lenkiewicz was said to have regretted that he was unable to perform the service for his own mother. When Damien Hirst embalmed a shark Lenkiewicz described him as ‘a mere beginner’.

Diogenes remained for eighteen years as a philosophical artefact in the studio, a Momento Mori. A pickled tramp, he had the presence of a corpse and the absence of a person. ‘To paint oneself is to paint a portrait of someone who is going to die’ said Lenkiewicz. When the artist himself died in 2002 Diogenes was found in a drawer in the studio alongside the skeleton of Ursula Kemp a 16th century midwife who had been hanged for witchcraft, and a first edition of Hobbes’s Leviathan. In October 2002 the local coroner found that Diogenes had died of natural causes and the corpse was permitted to be returned to the Lenkiewicz estate. It has since been exhibited in Bristol and Plymouth. An itinerant in life Diogenes is a wandering corpse in death and remains of no fixed abode.

Diogenes of Sinope was called a Cynic (dog) because he lived on the streets of Athens and bit people with his acerbic wit. He divested himself of almost all possessions, made the ground his bed, lived a life of poverty, inured himself to hardship and dismissed the things that other people valued. He was the philosopher vagrant who by obtaining a mastery over himself tested with fortitude passed his days in equanimity. By living without concern for the future he achieved an invulnerability over fortune. He rejected standard ideas of human decency and made a virtue of the epithet ‘dog’. Nietzsche once declared that the highest life to be obtained on earth was Cynicism. There is no cynicism in Cynicism.

It is a commonplace of Socratic thought that one can be rich by being satisfied with very little. Diogenes lived a life of crude animality in a barrel, ate raw squid to avoid the trouble of cooking, urinated and masturbated in public, saw nothing wrong in eating human flesh, begged from a statue saying ‘I’m getting practice in being refused’ and when asked what was the most beautiful thing in the world said ‘free speech’. Of masturbation he said ‘if only one could do away with hunger by rubbing one’s stomach’. He took his philosophy to the streets and challenged the citizens of Athens with his barbed utterances. When asked who was rich he said ‘he who is self-sufficient’; when asked what he gained from philosophy ‘to be rich without having a coin’. Diogenes understood that real poverty does not rest in having nothing but in desiring everything. Diogenes was content with nothing whereas others were unsatisfied with all they could muster. Diogenes lived a life stripped bare of conventional attachments. He ridiculed good birth and reputation and when asked how best it was to gain a reputation said ‘by holding reputation in contempt’. Diogenes attended Plato’s lectures, for whom he had no regard. After Plato defined a human being as animal, biped and without feathers, Diogenes arrived with a plucked chicken and said ‘behold Plato’s man’. Walking backwards in a public arcade Diogenes laughed at the others who were going in the wrong direction in life. He sought to liberate himself from conventions that were an impediment to flourishing. Plato called him ‘Socrates gone mad’.

Diogenes’s philosophy was a lived practice transmitted through disarming comedy. He favoured apothegms of pithy wit, a serio-comic style of sharp-witted wordplay rife with ambiguity and laced with jest. His apothegms were a means of exerting a form of control over an unruly world: they brooked no argument. He placed no value on argument or logic and his ideas came in the pungent form of terse repartee. Thus he unleashed his satiric scorn on the smug citizenry of the ancient polis. He said ‘other dogs bite their enemies, but I my friends so as to save them’. Collections of his sayings and anecdotes were made famous by Plutarch, Philo of Alexandria, Stobaeus of Macedonia, Diogenes Laertius, Epictetus the Stoic, St. Jerome, and others.

Diogenes was a contrarian, a dog who prosecuted a witty campaign against illusion and false values. Asked whether the gods existed he replied ‘the prosperity of the wicked is telling evidence against the gods’. Only for those people who had no limit to their pretences and delusions was it expedient for the gods to exist. He said ‘to the foolish the truth is bitter and unpleasant, while falsehood is sweet and agreeable’. He endured the truth and sought to flourish by freeing himself from false opinions that enslave people. He was the philosopher of destitution who discarded the false values and vanity of the world. He famously lit a lantern in broad daylight and walked through the busy Athens streets declaring that he was searching for a human.

One thought on “Diogenes”