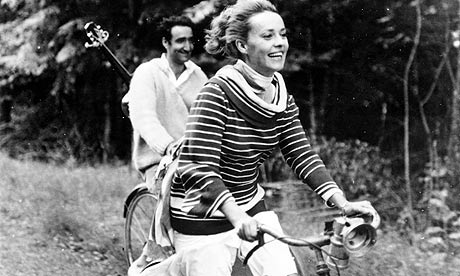 Jeanne Moreau, one of the iconic French actresses of her generation, has died today in Paris. She had the fortune to be at the peak of her powers during one of the great ages of cinema. She acted in films made by some of the best post-war directors: Antonioni, Welles, Truffaut, Bunuel, Fassbinder. I want to write about three of her films (all shot in black and white): Lift to the Scaffold (1958, Louis Malle), Jules et Jim (1962, François Truffaut) and Diary of a Chambermaid (1964, Luis Bunuel).

END_OF_DOCUMENT_TOKEN_TO_BE_REPLACED

Question: is it better for a human to choose to be bad than be conditioned to be good?

The American psychologist B. F. Skinner believed that human behaviour was determined by environmental variables rather than free will, and that by systematically altering those variables human behaviour could be modified. In this way humans could be conditioned to display good, rather than bad, behaviour. He developed his theory of applied behavioural analysis from experiments he conducted in the 1930s on rats. He invented and constructed an enclosed soundproof cage with food dispenser that a rat could operate by pressing a lever, called a ‘Skinner box’. END_OF_DOCUMENT_TOKEN_TO_BE_REPLACED